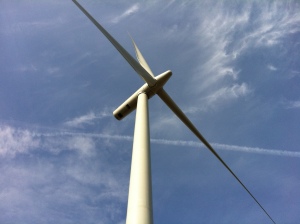 In a Proposal of Application Notice (PAN) submitted to Dumfries and Galloway Council, the developer has outlined proposals to move forward with community consultation on a scheme comprising of 24 turbines with an anticipated total installed capacity of 48MW. Each turbine will measure a maximum of 125m from ground to blade tip.

The new proposals come on the back of a Scottish Government decision in February 2015 not to grant planning consent for a 30-turbine scheme because of landscape and visual impact concerns.

The developer will showcase the new proposals in a series of public exhibitions in Sanquhar and Kelloholm on Wednesday 10 and Thursday 11 June and is encouraging members of both local communities to attend to find out more about the proposals and put forward any suggestions that they might have for the associated community benefit fund worth up to £240,000 annually.

The events will feature exhibition boards and a 3D computer model of the site to show people how the development would look from practically anywhere in the local landscape. Members of the Burcote Wind project team will also be on hand to answer any questions and collect feedback.

The exhibitions will take place on:

“Understandably, we were bitterly disappointed by the Scottish Government’s decision not to consent our previous 30-turbine application and this was compounded by the massive local support that the proposal had.

“Very early on after hearing the decision, we resolved that we would not give up on the Sandy Knowe site, not only because we strongly believe that the site is suited to wind farm development, but because of the incredible support we have had from local people who know how much the investment from the wind farm and associated community benefit fund could mean to the local community.

“That is why we have come back with these new proposals with even less impact on the local area.  Also, as a development of under 50MW it will be determined by Dumfries & Galloway Council and local Councillors who previously raised no objection to the larger scheme.”

“I am also delighted to be able to announce that Burcote Wind has updated its Community Shared Ownership Policy which will be offered to the local community as part of the new proposals. This will be over and above the industry standard community benefit fund of £5,000 per mega-watt of installed capacity.”

“I would urge anyone with an interest in the Sandy Knowe project to come along to the exhibitions in either Sanquhar or Kelloholm and see the revised proposals and give us their comments and feedback.”

For further information please contact Catherine McWilliam at Orbit Communications on 0131 603 8996 or catherine.mcwilliam@orbit-comms.co.uk.

Comments Off on New proposals for Sandy Knowe wind farm