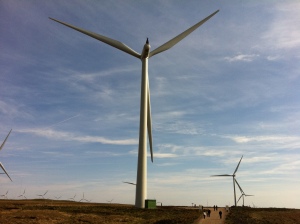 Renewable energy developer Burcote Wind has today officially submitted its planning application for a thirty-turbine wind farm at Sandy Knowe in Upper Nithsdale to the Scottish Government. Burcote Wind believes the project will generate jobs, create skills and bring massive community benefit to areas like Kirkconnel & Kelloholm where unemployment is nearly double that of the rest of Dumfries & Galloway.

Located south-west of Kirkconnel and Kelloholm, the proposal would consist of thirty turbines that will measure a maximum of 125m from ground to blade tip, with a total electricity generating capacity of 90 megawatts (MW). The wind farm has the potential to provide sufficient electricity to meet the needs of up to 41,700 homes and to displace 112,916 tonnes of CO2 per year, based on the average generation mix of UK power sources.

As well as two separate rounds of public exhibitions, in February and September 2012, Burcote has sent out newsletters to nearby residents, engaged with local community councils, established a detailed project website (https://sandyknowewindfarm.com/) and setup a Community Liaison Group (CLG) to look at the plans in detail. The group has met three times since its creation; in July, September and November 2012, and has been very active at suggesting the kind of projects the Community Benefit Fund could support to have maximum economic impact and leave a positive legacy from the wind farm.

Some of the ideas suggested have included the community paying for local apprenticeships, bursaries for young people to go to university and outreach centres with local colleges. Burcote Wind’s role following consent would be to ensure the funds are properly administered but that local people should decide what the money should be used for.

Burcote Wind’s approach has also seen the proposal enjoy broad and growing support locally. At public exhibitions held in March 2012, 70% respondents to a questionnaire were either “Supportive” or “Very Supportive” of the Sandy Knowe windfarm proposal whilst, at a similar exhibition in September, that number actually rose to 83%.

“We’ve been delighted, not only with the support in the community, but with the ideas and advice of local people. Burcote firmly believe that the open and honest dialogue we have maintained from the outset, along with our focus on ensuring that the community benefit fund we are proposing be used to provide jobs and skills to grow the economy, have shown local people that we are a responsible and community-spirited company.

“In the event we are granted consent we look forward to working with the local community in future to ensure that construction commences quickly and that the community are given all the support they need to ensure a positive lasting legacy from the Sandy Knowe wind farm.”

1. Burcote Wind is an independent renewable energy company based in Dunfermline, Scotland, but active throughout the UK. The company specialises in onshore wind energy projects from the identification and design stage right through to construction and operation. http://www.burcotewind.com

2. PDF Copies of the submission, including associated Environmental Impact Assessment (EIA) and Pre-Application Consultation (PAC) Report containing information on the figures described above are available on request.

3. Scottish Neighbourhood Statistics “Percentage of working age population who are employment deprived” for 2010 in Dumfries & Galloway was 11% and for the Community Regeneration Area of Kirkconnel was 21%.