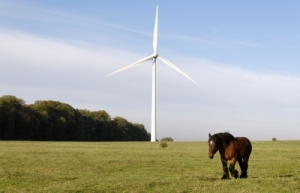 Green energy firm Burcote Wind is set to stage a series of community engagement events around its proposals for a wind farm at Sandy Knowe, near Kirkconnel and Kelloholm.

The 67.5 megawatt (MW) proposal at Sandy Knowe will have a maximum of 27 turbines and could power 38,000 homes – the equivalent of 55% of all homes in Dumfries and Galloway or 70% of East Ayrshire households – as well as generating up to £5.06million for the local community over its lifetime.

It would also offset 76,000 tonnes of carbon dioxide every year, reducing Dumfries and Galloway’s carbon footprint.

Burcote Wind has said that, as part of its proposals, it would create a community benefit fund worth up to £202,500 per year, or £5.06million over the 25-year lifetime of the wind farm. The community benefit fund is calculated as a payment of £3,000 per Megawatt (MW) of total generating capacity. It would be a fixed payment every year and would not fluctuate with production, providing stability for the community.

This could provide funds for local organisations and initiatives in close proximity to the wind farm and a distribution mechanism would be agreed with local representative groups.

A community website – http://www.sandyknowewindfarm.com – has been set up to keep local people informed with maps, photomontages, progress on technical studies and dates of meetings or public exhibitions.

“We hope as many people as possible will be able to join us at our public exhibitions in Kelloholm, New Cumnock and Sanquhar.

“As well as exhibition boards giving detail about our proposal for Sandy Knowe, there will be a 3D computer model of the site to show people how the development would look from practically anywhere in the local landscape.

“Members of the Burcote Wind project team will also be on hand to answer any questions and collect feedback.

1. The 27x 2.5 megawatt (MW) turbines proposed for the Sandy Knowe site would have a combined output of around 67.5MW. This is enough to:

2. The proposed community benefit fund is equivalent to an annual payment of £3,000 per Megawatt (MW) of installed generating capacity. This would produce an annual ‘royalty’ to the community of up to £202,500 (based on the output of 27 turbines of 67.5MW), or £5.06million over the 25 year lifespan of the development. The payment would be fixed and would not fluctuate with production, to guarantee stable funding. The exact vehicle for delivering this resource to local community projects will be determined in close consultation with community representatives.

3. As part of the future planning application, Burcote Wind will need to compile a detailed Environmental Impact Assessment (EIA) to identify the potential impact of building the wind farm on the local environment, ecology and plant and animal life. The EIA must demonstrate that the benefits of developing the site clearly outweigh any potentially negative impacts. In addition, Burcote Wind will have to demonstrate how the site can be physically and ecologically restored following the 25 year lifespan of the wind farm. A planning application will not be submitted until the summer of 2012 at the earliest.

4. Burcote Wind is an independent renewable energy company based in Dunfermline, Scotland, but active throughout the UK. The company specialises in onshore wind energy projects from the identification and design stage right through to construction and operation.

6. For more information, please contact Orbit Communications on 0131 257 4232 or contact@orbit-comms.co.uk.